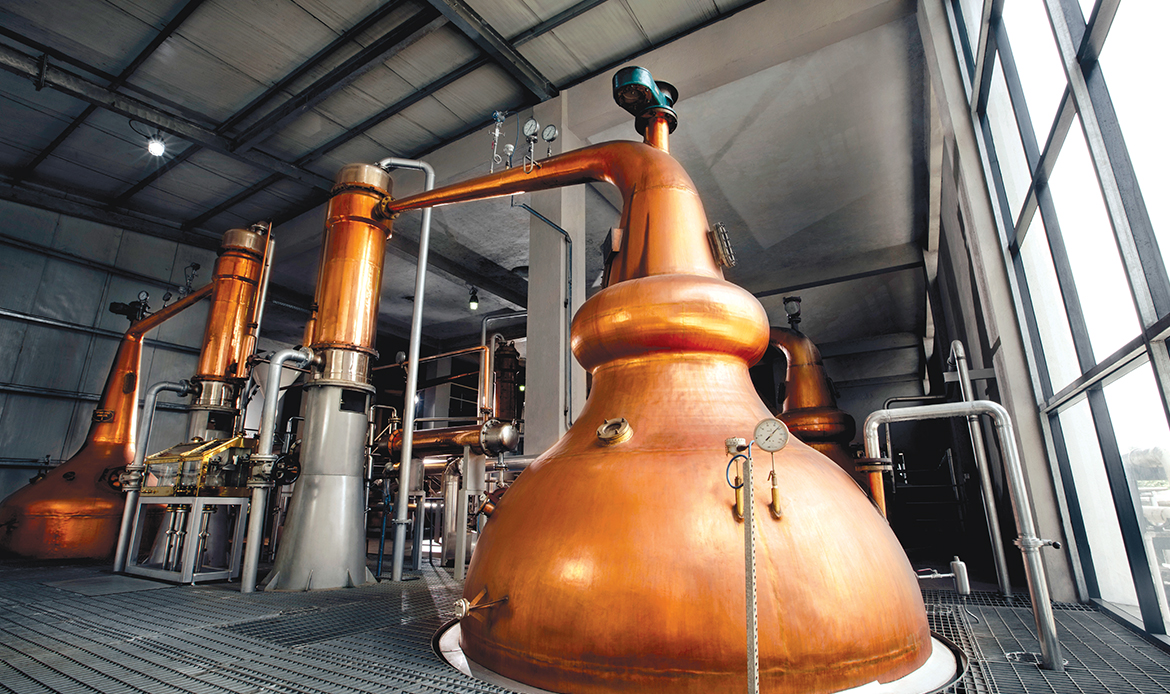 This is one among four copper pot stills at the Paul John distillery. The design and testing of the still was done in-house, and the manufacturing contracted to an Indian company.

Distillation essentially involves the separation of the components of a liquid mixture by selective evaporation and condensation. Distillation via a pot still (also known as an Alembic still) is possibly the original technology for making potable distilled spirits in different cultures around the world, going back possibly at least 1,000 years.

The other major type of still used is the column still, also known as the Coffey still – after Aeneas Coffey, who made several improvements in the design of the original column still. The essential difference between the two is that the aim of column distilling is to produce a very clean alcoholic fraction, with no special sensory characteristic, essentially ethyl alcohol and water, or extra neutral alcohol (ENA).

The fermented mixture typically is either grain or molasses. The purpose of a pot still, however, is to capture the natural flavour of the fermented liquid. The Indian alcobev industry has, for the past century or so, been driven primarily by the use of column stills, producing large volumes of molasses-based ENA, which is the basis of vodka or Indian whisky.

Limited demand for pot-still-produced spirits, apart from the rare exception perhaps for a company producing small amounts of malt spirit, has implied a relatively narrower pot still manufacturing base in India.

A few significant trends are, however, reshaping the Indian alcobev industry, and driving an increasing demand for pot stills, with a resulting opportunity for local equipment manufacturers:

The essential premise of a pot still has not changed much over the years – you require a heating source, a pot to evaporate the fermented liquid, and something to condense it. That’s the science part. The ‘art’ of pot distillation has always varied considerably, based on the specifics of the fermented liquid being distilled.

One big recent change, though, is the level of sophistication and scale of the pot stills, with several setups being highly automated. Pot stills vary in size, ranging from a few hundred litres (quantity of fermented liquid), medium-sized ones such as those used by Agave India (7,000 litres), and can go up to 20,000 litres.

The material used is also typically either copper or stainless steel, or in some cases a combination of the two.

Paul John Distillery has four traditionally designed copper pot stills. The entire design and engineering of the still was done by in-house, with manufacturing of the still itself contracted to an Indian company. According to Michael D’Souza, Master Distiller, the company did consult with several coppersmiths overseas, but ultimately went with the Indian option.

The company declined to give reasons for going with a local supplier; but one can imagine that cost also would have played an important role, especially with such large copper stills.

Rahul Kansara, who works for a Gujarat-based stills supplier, Naran Lala & Sons, also indicated that copper pot stills could cost up to nine times their stainless-steel equivalent, owing to the material costs and the increased labour involved.

With column distillation the material used doesn’t really matter, as there is no flavour related aspect. As Desmond Nazareth of Agave India says, “With pot distillations, depending on the kind of fermented substrate you are using, there are often times sulphur containing organic chemicals. Copper captures much of that sulphur, so we use copper elements only at that particular stage of pot distillation.”

This is a cost-effective way to do it, rather than have a full copper still, Desmond adds.

Hagyo Spirits was also extremely supportive during the formative stage of Nao Spirits’ venture, fielding tonnes of queries on pot stills and distillation.

Anand, a first-generation entrepreneur with no prior background in spirits production, was not aware of any local sources of supply. Although the newcomers are now more aware, he feels that even if there had been a choice they would still have gone with Hagyo.

Rahul Mehra of Third Eye concurs with Anand. After some research, he and his business partner decided to go with Netherlands-based iStill. The key criteria for them, apart from the high levels of automation and versatility of the still, was the holistic service extended by the iStill team.

A team from Third Eye attended a 10-day course at iStill in the Netherlands, which saw Rahul and his partners fully immersed on how their still could be used to produce a range of products.

Desmond says the time is ripe in India for craft distilling to take off, with a lot of scope for entrepreneurs to get into pot distillation. Desmond himself has recently expanded his craft product pipeline by adding DJ’s ‘forest-to-bottle’ version of the Central Indian tribal drink, Mahua, the world’s only spirit distilled from naturally sweet flowers.

Desmond has also been instrumental in drafting the 2018 notified standards related to pot still distillation for the Food and Safety Standards Authority of India (FSSAI), with the definition going as: “Pot still distilled spirit is an alcoholic beverage obtained from multiple distillations of fermented molasses, jaggery, mash of cereals, potato, cassava, fruits (such as grape), juice or sap of coconut and palm trees, agave plant, sugarcane juice, cashew apple, mahua flowers, or any other source of fermentable carbohydrates of agriculture origin.”

As Desmond says, the interpretation has been kept as wide as possible in terms of the kind of raw material that can be used for the making of pot still products, so that the fermenting material can be from just about any agricultural source. “This is an open invitation to entrepreneurs to innovate, especially with craft versions of Indian heritage spirits,” he adds.

For some entrepreneurs, who raise hard won capital to get their venture off the ground, there might definitely be a cost saving in opting for an Indian supplier. The other, and possibly even more important criteria, is the holistic nature of solutions provided by international vendors, especially valuable for Indian first-generation distillers who might value their expertise and experience.

There are, however, pot still manufacturers in India, including the afore mentioned Naran Lala & Sons, who have been supplying pot stills since the 1940s and have supplied stills to several Indian companies, including Jagatjit Industries, Som Distilleries and Amrut Distilleries.

Rahul (of Naran Lala) says that although they do not provide advice on distilling per se, they do design the pot stills as per customer requirements, and also supply an automation package for the same, with operations handled via a microprocessor-controlled touch-screen interface.

Indian suppliers of spirits stills, brewing and wine making equipment – as well as those supplying ingredients – would do well by hand-holding their customers through their entrepreneurial journey. Sometimes this is more important than the actual products they supply! 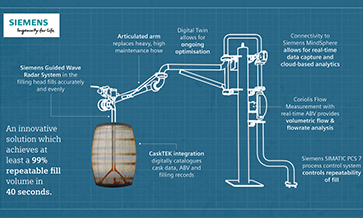 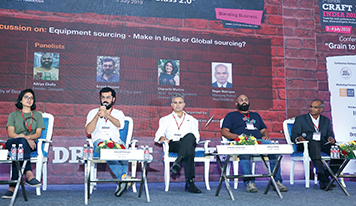