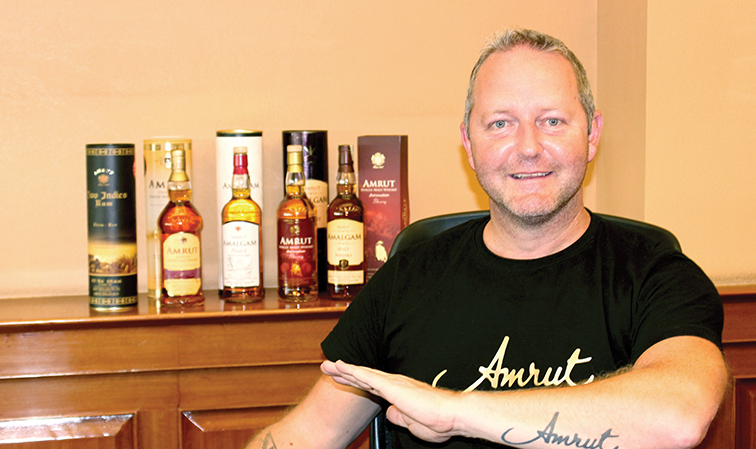 With striking tattoos on his arms (L), including one of the Greedy Angels (R), Dennis is already something of a legend in the world of whisky.

Dennis Steckel is the founder of two of the most exclusive whisky clubs in Sweden, the Elme Uisge Academy and – surprisingly – the Amrut Fever Club. Roy Thomas met with the whisky aficionado at Amrut Distilleries’ office in Bengaluru recently to find out what he is all about and what makes him tick.

If one tries to figure what’s Indian that has created a buzz globally then Ayurveda and Yoga are perhaps what automatically come to mind. One could include Indian classical music – and more recently, Bollywood movies and music – to the list.

The large Indian diaspora has also played a large part in disseminating information about Indian culture. So, when you add curry and tandoori chicken to the mix, you arrive at what really defines India in the minds of the West.

Meanwhile, even as liquor brands, such as Scotch and Irish whiskies and European wines, are exponentially increasing their footprint across the country, there are a few Indian products that have established a niche for themselves in the collective consciousness of the Western mind.

Indian single malts like Rampur, Paul John and Amrut are creating ripples in the very backyard of these giant European whisky producers – and giving birth to hard-core, die-hard fans in their wake.

Meet Dennis Steckel, the man who started the Elme Uisge Academy, a whisky club, in Almhult (Sweden) in 2010. Sporty fit, the tall, burly and affable Dennis cuts a colourful figure in his jeans and tees.

With striking tattoos on his arms– one of Amrut in script, the other of Greedy Angels – Dennis is already something of a legend in the world of whisky. He is a logistics professional with IKEA and a junior league football coach. But his avocation and passion in life is whisky!

The club’s membership is only for people who really enjoy and appreciate their whisky and is currently capped at 33. The club has 130 others on the wait list! Every year, the members meet only for four sessions, but each long-awaited session is so classy an event that it is something that is in much demand and members eagerly look forward to attending it.

Dennis’s love story with products from Amrut Distilleries, and its single malt in particular, is unique and probably one of the single malt’s biggest fan stories. He first came across 10-year-old Greedy Angel in 2014 and thought the name was interesting.

On a hunch, he bought two bottles from a collector in the Netherlands of what was at that time a relatively unknown whisky, exchanging it for a well-known Scotch whiskey from his collection.

For Dennis, Amrut was love at first sip! He says he was blown away by the “impeccable quality and intense profile” of the Greedy Angel; and since then there has been no stopping him! Today, the Greedy Angels 12-YO is the few whiskies from Amrut to carry an age statement and retails at $1,000!

Ever since he first experienced a dram of India’s flagship malt, there has been no turning back, and his love for India and Amrut has grown by leaps and bounds.

That year, Amrut made a special bottling of its limited edition, premium brand Amrut Fusion for the club. The whisky was different in that it had been kept for 2 more years in Sherry casks and was named ‘Confusion’— a little twist on its name ‘Fusion’, to differentiate it and make it stand out!

Each thrilled member of the club was given a bottle. But what is it in the whisky that has ignited and kindled such a passion for the brand? Without any hesitation Dennis bursts into paeans on the unique features of Amrut variants that differentiate it from the competition.

“I love the fruitiness. Amrut whiskies are always very fruity and each one has a different expression,” he observes, “Its ABV is high (around 50%) and that definitely makes for a good whisky. It also has a lot of flavours. You can nose the peatiness in the whisky without feeling it strong. It’s not just peat or smoke, you get a little of both.”

Dennis is often compared to a monk, draped in self-styled Amrut robes and going around the world sharing his joy and affection for the whisky. He can reel off the names of every single Amrut variant, quoting the most obscure technical details of each batch of the 24 variants that the distillery makes for international markets!

His personal mission is to touch as many lives as possible and welcome Amrut to as many homes as he could. This unconditional love has made him a familiar name in the world of whisky in Europe, and he has been the envy of brands around the world.

Today, Amrut Fever Club has over 7,000 proud members from all corners of the world with numerous applicants aspiring to be a part of this elite community. By uniting this global Amrut family, Dennis has truly taken on the form of a preacher, spreading his message of Amrut wherever he goes.

“Amrut is not just about the whisky,” notes Dennis. “It is about this amazing family, how they do it, the distiller and the women that work there, the packaging and design,” he cannot help gushing.

Dennis today holds one of the most exclusive collections of Amrut’s in the world, which includes one of India’s best-known Amrut Fusion single malt that has been ranked the third-finest whisky in the world by Jim Murray in his Whisky Bible.

Dennis’ personal collection of Amrut brands stands at around 200 bottles that have been sourced from around the world, often with remarkable logistical planning and considerable financial cost.

Dennis has built his collection with care, with bottles spread across batches and countries of sale; and one could say confidently that he is a true authority and a repository of information on what Amrut has to offer.

If Amrut can continue to produce die-hard evangelists like Dennis Steckel, who promote the whisky with such zeal and enthusiasm, then it can rest assured that it has, as a brand, arrived on the world stage and will remain rooted there for time to come!! 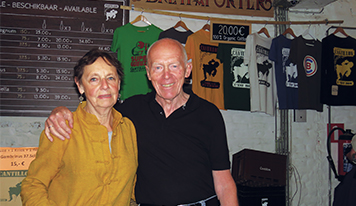 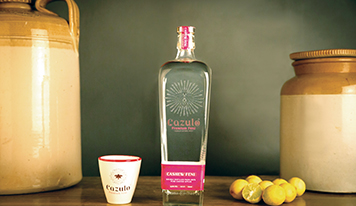 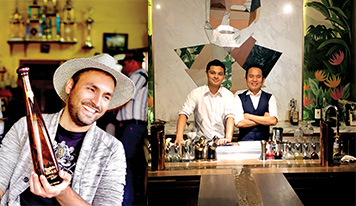