Rampur Distillery in Uttar Pradesh, a major bulk spirits supplier, commenced operations in 1943. It was purchased in 1972 by the Khaitan family for Rs. 16 lakh.

But it was not until Dr Lalit Khaitan, now Chairman of Radico Khaitan Ltd., inherited it in 1996 that he realised that the only option to grow was to become a national player.

“We knew that any strategy executed based out of the state would neither be effective nor be a financially viable option. So we came up with bottling plants in Thimmapur (Telangana), Aurangabad (Maharashtra), Reengus (Rajasthan) and Bajpur (Uttarakhand),” Lalit recollects.

Contessa rum was the sole brand in the initial days. In 1998 another brand, 8PM whiskey, was launched. The flagship brand of Radico Khaitan is the first in the Indian liquor industry to make it to the ‘Limca Book of Records, 2001’ for selling 10 lakh cases in the first year of its launch!

It had not been a bed of roses though. Lalit says, “We acquired the Rampur distillery, but realised we bought a sick company. Coming from a complete teetotaller family, I had limited knowledge of the business. With no consultancy firms and a lot of liabilities, I had only my burning ambition to expand the business and take it to another level.”

After gaining adequate knowledge and confidence over the years, Lalit decided to create the global division, ‘Radico International’, in 2003. This brought in global brands such as Beck’s beer and wines from E&J Gallo to India.

When Mr Abhishek (now Managing Director) was inducted into the company the times were tough. “We wanted to expand from being a company that just produced alcohol for other companies (Shaw Wallace and United Breweries).”

Abhishek, armed with fresh ideas, was adamant about creating something of Radico’s own; he firmly believed that it is only a strong consistent brand built over time which ensures guaranteed future earnings.

The father-son duo’s first attempt was to get the right manpower from the industry. “To our dismay, no one from established companies was willing to join our struggling group. So Abhishek decided to hire capable resources from the lower rungs of the industry. He convinced me to not recruit experienced people with pre-set notions, but youngsters who were ambitious and would bring fresh ideas to the table,” Lalit recalls.

With his contribution and role in the making of Radico and 8PM, Abhishek proved his brilliance, which he continues to showcase with new-age ideas and trends.

As a successful veteran businessman now, Lalit is very pleased with the growth of the single malt whiskey category that has placed India on the world map. “Due to its geographical location and weather conditions, India is unique; and to share that with the world is extremely satisfying,” says Lalit.

The same is happening in the craft gin category. “The use of botanicals is a time-honoured tradition in India. To showcase this ancient knowledge of herbs to the world augurs well for Indian craft gins, he feels.

As for his own favourite tipple, Lalit he is an occasional, social drinker and does not have a pet category or brand.

When Abhishek joined his father in 1997, after completing an engineering degree in industrial production in Bengaluru, his task was clear: the transition from making bulk products to establishing his own brands.

What has Abhishek done differently in the company? we ask. “I was given a free hand to experiment and bring creative ideas. It all began with the thought of becoming a branded company, rather than being just a commodity company,” he says.

After the tremendous success of its first whiskey brand, Radico Khaitan ventured into a yet-untapped category in white spirits, vodka. In 2005 the company launched Magic Moments Vodka. Today it is the largest selling vodka in India and the 11th largest vodka brand in the world.

“All this is my father’s legacy. He encouraged me to pursue my passion without worrying about the results.  Dad says hard work never goes unrewarded. Also, he has taught me to be a proud Indian and not to be afraid of taking risks,” Abhishek says.

In his view, innovation should cover every aspect: taste to satisfy one’s palate, attractive packaging and creative presentation. Brands should understand what appeals to the target audience, including the Millennials, and adopt newer technology.

“An example is our own Magic Moments vodka, which is a trendsetter for its packaging: a frosted bottle, the label and the visual elements directly printed on the bottles,” he tells us.

We come to the inevitable end-of-session question: what is Abhishek’s favourite drink? “I like to go for vodka-based cocktails occasionally. But I would prefer whisky – be it single malt or Scotch. Nothing matches the authentic taste and explicit flavour of this traditional drink,” he signs off. 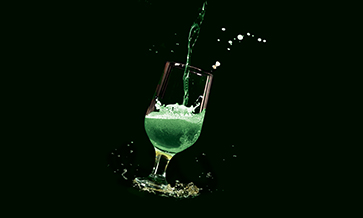 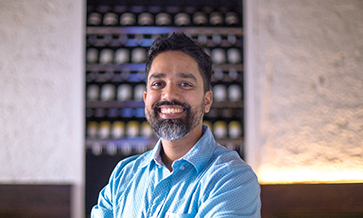 NV Group: ahead of the times